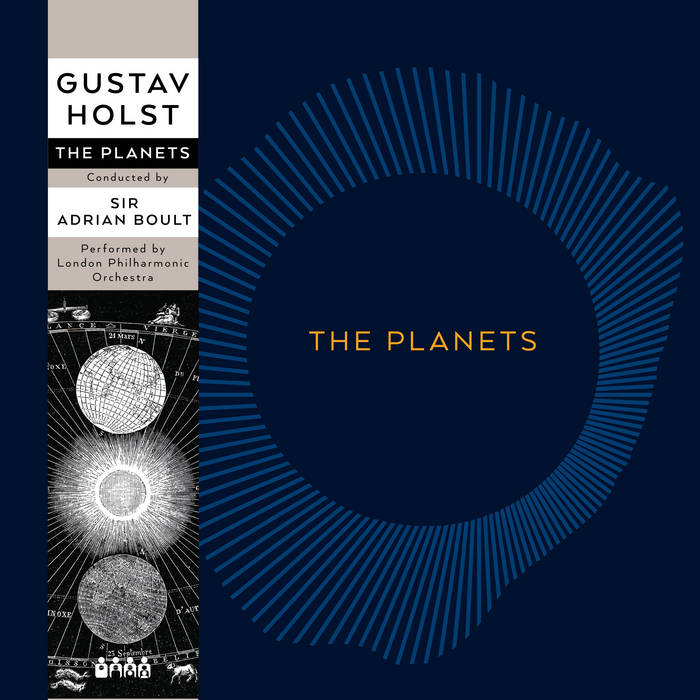 Harmony of the spheres

According to astrology, every planet in our solar system represents a certain mood. Inspired by this idea, Gustav Holst (1874-1934) composed his seven-part orchestral work The Planets, in which the planetary moods are convincingly turned into sound, from the aggressive Mars to the mystical Neptune and the tender Venus. The Planets has had much influence on the later genre of film music. Especially in films about interplanetary wars, the legacy of Holst is clearly audible, with John Williams’s Imperial March from the early Star Wars films as
the most famous example.

Holst composed The Planets between 1914 and 1916, during the First World War. It is therefore not surprising that the British composer starts his piece of music with Mars, the planet named after the Roman god of war. The opening measures sound ominous and threatening, and the music soon develops into an aggressive, pounding march, too fast for human beings to actually march on. Some interpret this as Holst’s criticism on the inhumane nature of modern mechanical warfare. Yet the music of Mars is also compelling and exciting, and its powerful, primitive rhythms are somewhat reminiscent of Stravinsky’s Le sacre du printemps.

A greater contrast than between Mars and the subsequent Venus is almost unthinkable. Venus was the Roman goddess of love, and is regarded as the bringer of peace in astrology. Mars’s blaring trumpets and battering beats have been replaced by calm, cradling, cloud-like sounds that evoke associations with ‘Nuages’, the first part of Debussy’s impressionist Nocturnes. Occasionally the violin sings a lyrical solo, expressing tender desires and romantic dreams. ‘Everything will be fine,’ is the reassuring message from the goddess of love.

Mercury has a lightness similar to Venus, but is more restless and energetic. In classical mythology, Mercury was the messenger of the gods, who crossed the skies with wings on his feet. Holst brings Mercury’s light-heartedness to sound through a swirling melody that is constantly repeated, evoking images of flapping wings or hasty tripping passes.

Jupiter, the Roman supreme god and the largest of all planets, forms the center of Holst’s composition. The fluttering of Mercury has given way to confident, firm steps: Jupiter sounds royal, cheerful and at times even bombastic. In stark contrast is Saturn, the dangerous, power-hungry god who had been knocked off the throne by his son Jupiter, personifying faded glory and old age. His music sounds nocturnal and dark, and swells very gradually into a sinister march, interspersed with bells that refer to the passage of time.

Uranus, the Roman god of heaven, is considered a magician in astrology. His part is perhaps the richest of The Planets: it forms a lively succession of countless motifs and rhythms, and is as changeable as the weather. As the god of heaven, Uranus has enormous power over life on earth, which is expressed through tough, vigorous march music, lots of percussion and triumphant brass instruments.

The Planets ends with Neptune, the farthest-removed planet in our solar system, named after the Roman god of the sea. In Neptune’s music, which flows and ripples like waves, the heavenly sounds of the harp and the celesta – a tingling, piano-like instrument that evokes associations with bells and whirling star dust – play a central role. Halfway through, an ethereal women’s choir starts, reminiscent of Debussy’s Sirèns, mysterious nymphs with a beautiful, unearthly voice. As one of the first in the history of music, Holst ends his composition with a fade out, moving the female choir gradually away from the stage. As a listener you get the impression that the piece of music is not really over, but continues to infinity.

The 1978 recording of the London Philharmonic Orchestra, led by ninety year old Adrian Boult, is considered one of the very best. Sixty years earlier, Boult had directed the premiere of The Planets: he was, in Holst’s words, ‘the one who caused my Planets to shine for the first time’. Because of his lifelong experience with the composition, Boult succeeds in putting a special depth and concentration in his recording, thus completely carrying the listener away on a mysterious, dramatic interplanetary journey.

Released by Edit.Futurum.
Under license from Warner Classics.

Distributed and manufactured by Clone Distribution.

Semiratruth joins the show to discuss their latest release, "loading..".